(This gun have been provided for review by Begadi.com)

The M41 is for all intent and purposes a G3 but because Begadi decided to work with Schwaben Arms instead of Umarex and H&K, the names follow the SA conventions. For the airsoft market, there is virtually no difference save the trademarks.

SA makes licensed clones of a large number of weapons, including the FN FAL, Uzi, MP5, G3 and HK 33 – mostly for the civilian German market. The M41 Light Sniper Rifle is one of their flagship products, featuring a rail interface system for the handguard and a M4 Style adjustable stock and is chambered for the .308 Winchester.

The Airsoft Version of the Schwaben Arms M41 is made by Classic Army and features a full metal body, dean connectors* and a quick-spring-change system. There are a number of M41 variants available and this review should cover most of them. Before we begin, please note that the review sample is part of the German Production Run and lack full automatic mode. The International Version of the Gun will have select fire with both semi and fully automatic modes.

Begadi did very kindly send me a spare selector plate in case I would like to make use of the full auto feature but due to the real guns origins, I elected not to install it. 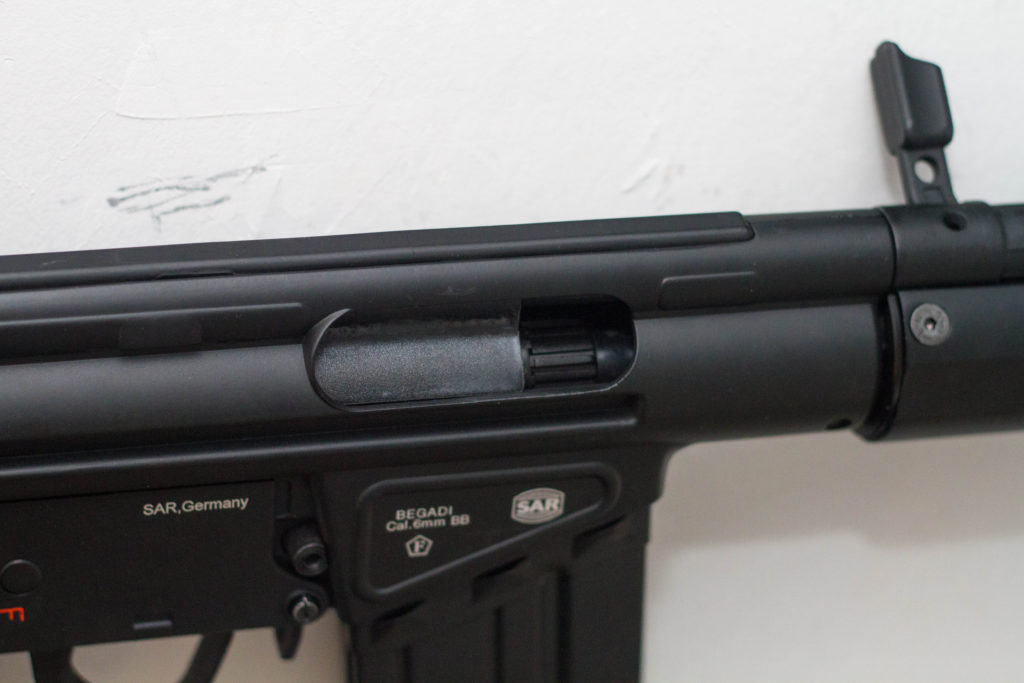 The body is made of a sturdy metal that applies a rugged feel to the gun and confidence that it will hold up to abuse – something my Version 1 Classic Army failed to do. It is however clear that something was learned from that experience and the lessons applied to this weapon. The body has a lot of trademarks from Schwaben Arms and while real trademarks is usually a feature, I am not certain SA is well-known enough for it to be a incentive. Only one of the Trademarks (the Classic Army one) are however engraved so if you really do not want them, painting the gun will do the trick. The upside is that Classic Army has gone with a lighter metal then the real gun, meaning it is a lot lighter, something you will most likely be thankful for after a day in the field.

The Hop-Up can be adjusted by pulling the charging handle backwards and as always, doing the H&K Slap is a very enjoyable experience. So far, I have not managed to break the handle and that is not because lack of trying. The Iron Sights mounted on the gun is the classic H&K Drum ones and will serve you well, though you may want to put on a red dot or a scope for this gun. Both the two third-party scope mounts I have tried have worked well and does the job well.

The magazine included fits like a charm in the magazine well but since there is no abundance of third party options for the G3, this is only to be expected. There do however appear to be feeding issues and that is disappointing, especially considering this is the magazine that comes with the gun. Using another brand (King Arms) did the trick for me and hopefully it will for you as well. 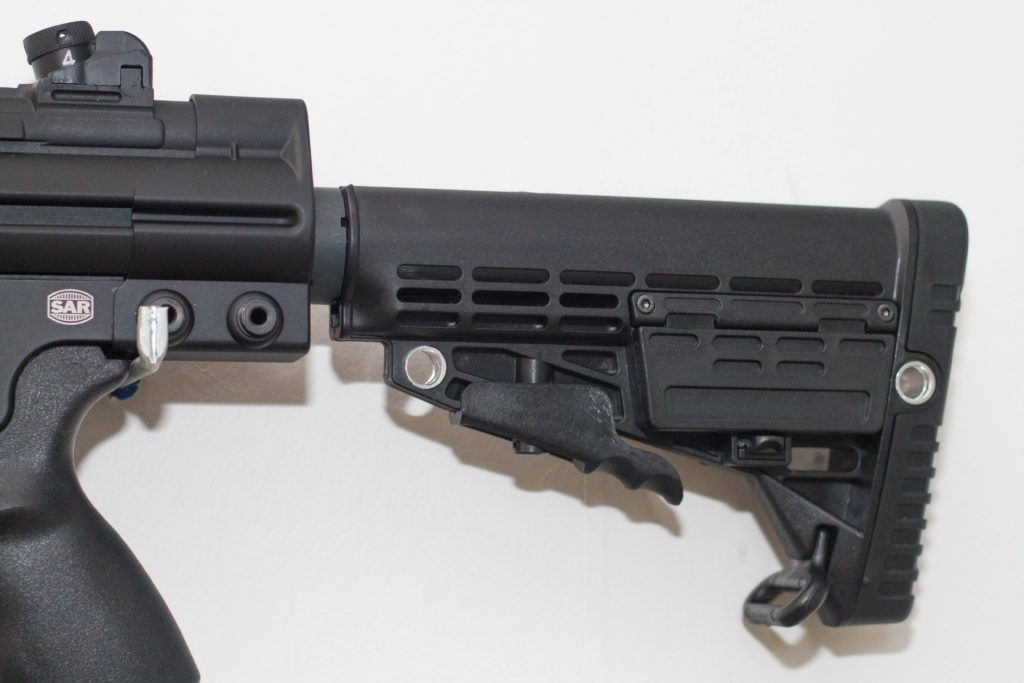 The Stock will be the major love or hate part of the gun and I would recommend Begadi to offer a free change of Stock as part of the deal of the gun, simply because it is commented upon. While the stock feels solid enough it suffers from the same problem as many sliding stocks in that it has a nack for coming off the Tube. While this makes for easier change, it can also be highly inconvenient in the middle of a fight. Amongst the better things – but one I doubt you will use very much – is a small compartment where you can store things. A nice touch at the very least.

Sliding the stock is however easily done with the tried-and-true M4 system but in my personal opinion, the M4 Solution just looks odd and breaks the symmetry of the weapon. It would be my suggestion that the gun would be offered with a stock of the customers choice but it would probably be easier to buy the M41 model you want and then buy the RIS system separately.

The Stock attached to the M41 LSR does however have serious issues. Upon delivery, mine kept spinning like it was a Stargate stuck on dial-up. I fixed it into position only to have the problem re-appear on my very first game. The most likely issues here is poor quality on the screw threads since no matter how much I try to fix the stock back into position, the screw simply refuses to connect. As I write this, I have run out of possible solutions to fix this save changing the entire stock altogether.

While on almost any weapon this would be an almost trivial exercise, it become an almost herculean task involving three people due to the way Classic Army have painted and varnished, making the layer between gun and stock very thick indeed and the means needed to actually separate the stock from the gun bordering on the ridiculous, especially if you consider that this is how you are supposed to access the Quick Spring Change system.

We also found a interesting discovery when removing the Stock in the form of two connectors in case you would wish to use your battery in the stock instead. The problem is that these where Tamiya Contacts, inferior to the Deans contact the gun come equipped with. Since any power from the battery to the gun have to pass these connectors, they will have to be replaced or soldered in order to gain any meaningful benefit from the Deans Connector. I sincerely hope Begadi writes a strongly worded letter to Classic Army on this point and gets this fixed, preferably in time for the international release. 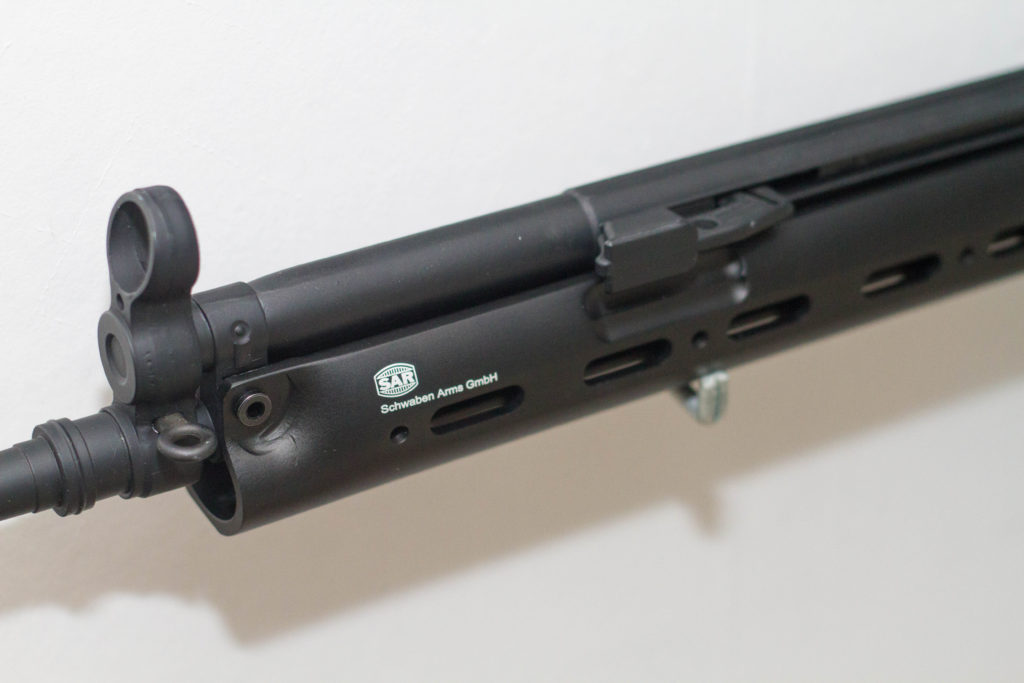 The Metal Handguard (can be purchased separately) is one of the guns big improvements and one of the things most fun to play around with. The handguard itself follows the design philosophy of the G3 Rifle but made out of metal instead of wood or plastic. It is also a lot thinner then the rival brands but still looks pretty damn good, especially when you got some rails on.

You will begin with the handguard, a set of screws and four pieces of rail that can be applied as you see fit. This system guarantees that there will be no need for empty rail spaces – if you do not need an accessory, you just take it off and remove the rail, giving the gun a much cleaner look despite the addition of a number of tools. The only thing I lack is the ability to mount a rail in an 45 degree angle – for an off-set RDS or Iron Sights – but since rail adapters for this purpose can be purchased cheaply, I do not mind.

Included with the gun is a foregrip with integrated bipods. I have never liked the looks of them and so do not use them but it is a nice gesture regardless.

The Battery – 7.4 or 11 Volts LiPo is almost necessary for this gun – is fitted inside the handguard. Removing the handguard takes longer then you are used to – there are two extra screws to loosen but while tedious is by no means the fun and games required for other guns. If you must, you can always use a PEQ Box for your batteries but I do not see why that would be required.

However, even the sun has its spots and the handguard is no exception. Inserting and removing the battery takes longer due to two extra screws that are most likely intended to keep the handguard from wobbling. They preform this task admirably but you must remember to keep an allen wrench with the rifle.

If I may be so bold – Part of why I think my reviews in Swedish are well liked is because I test the stuff in an uncontrolled environment and I do not think I have seen a better example as to why I do that but this gun. In my apartment and back yard, it preformed with honours but once we got it out in the field, the problems started to appear. At first, we had a trigger error meaning we had to open up the gun – made more difficult for the reasons described above – and when that simple problem was fixed, the stock started acting up.

I had hoped to provide a small movie from the skirmish with this weapon but I only had time to play a single game – not enough material to work with. That does not take away anything from the fact that is the result of actual effort to produce a high quality product. The performance is as expected – 110 m/s (360 FPS) with a 0.25g bullet and the lack of automatic fire (German Internal Market model of the gun) did not bother me at all, especially not when I could borrow a 11.1 volts LiPo.

With the release of the LC-3, this gun have sadly been outclassed in its price range. The accessories that make it unique can be bought separately and the LC-3 is the inherently better gun. If you have the money to spend for this one, spending it on the LC-3 a better option.